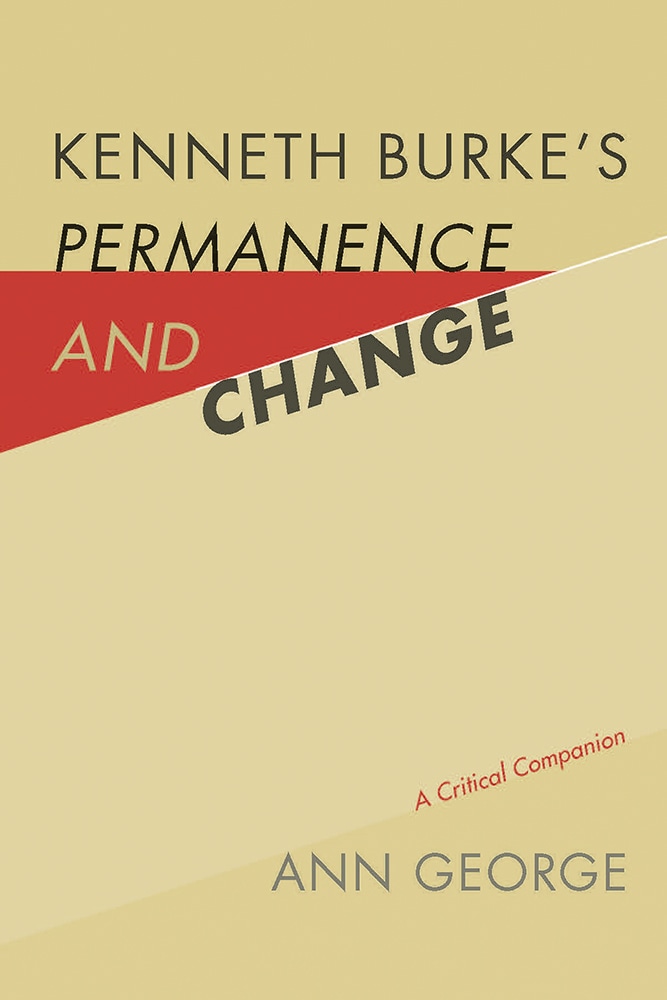 In her new book, Kenneth Burke's Permanence and Change: A Critical Companion, Ann George describes the historical and modern significance of Burkean studies. She frames Permanence and Change (P&C) as “the foundational text for modern rhetoric and, in particular, for the twentieth-century body of theory called New Rhetoric” (11). George provides a detailed, accessible analysis of Burke. She draws from twenty years of archival study to tell a new story that extends, and even challenges in some cases, current understandings of Burke’s life and personality, as well as interpretations of P&C and its place within the field of rhetoric. George's critical companion is certainly a valuable tool for students who are new to Burkean studies. However, amateur and expert readers alike will benefit from reading this comprehensive contribution to Burke scholarship. George explains that she wrote "in memory of the bewildered reader I once was" with the hope that "inexperienced Burke students will read my volume alongside P & C " (xiii) and come to a fuller and more nuanced understanding of Burke's most foundational text. George is not only a premier scholar of Burke’s work but also a captivating storyteller. She humanizes Burke, challenging the lore depicting him as an eccentric genius by providing evidence that Burke’s mission to inspire collaboration in order to promote human welfare can be applied to modern topics of rhetoric.

George’s critical companion opens with a concise twenty-five page introduction that should be required reading for all first time readers of Burke, regardless of whether they are specifically reading P&C. The introduction, “A First Look at Permanence and Change and Its Significance,” provides precisely the quick, clear overview students need. Students who are taking an introductory course in rhetoric and are reading just an excerpt of P&C will find the context provided in George’s introduction especially useful. The bulleted list of what George describes as “the claims fundamental to [Burke’s] life’s work” (9-10) provides students with an overview of the main elements of P&C so clear and all-encompassing, I found myself offering it to graduate students who were reviewing for their comprehensive exam in rhetoric. The section of the introduction titled “Situating P&C in 1930s America” is especially important because it contextualizes Burke’s desire to inspire social change within the historical events of the time, specifically the Great Depression and rumors of war in Europe. The introduction will likely be most appreciated by undergraduate and graduate students who need an overview of Burke before they read P&C for the first (or second or third) time.

George begins Part 1, “Translating Burkean Terms,” with an explanation of why Burke needed to coin seemingly peculiar, inherently ambiguous terms such as piety and metabiology and then draws from important scholarly conversation and her own archival research to provide nuanced definitions of those terms. Part I of the two-part book includes three subsections: “Pieties, Perspectives, and Incongruities”; “Metabiology as Purification of War”; and “Enacting the Poetic Orientation.” Like the introduction, Part I is especially useful for novice Burkean scholars because George provides a variety of accessible working definitions. For example, George defines piety as a term that for Burke “captures the often inexplicable or unarticulated (“It just isn’t done!”) intensity with which people bind themselves to, and are bound by” (35). She explains piety as more than just a social grace; it is a frame that determines what actions are appropriate and therefore available. George not only provides definitions for some of Burke’s most complex terms, but she also unites the terms in order to present a cohesive argument that P&C’s ultimate goal is portray “a need for communication, cooperation, participation—a need for humans to exercise their considerable powers as symbol users” (124). This argument solidifies her claim that P&C exemplifies New Rhetoric and its associated move away from logical empiricism.

In the much longer Part II, George offers three sets of documents she calls “archival interventions.” These documents provide new and exciting information for both new readers and scholars who may already understand Kenneth Burke the theorist but want to learn more about Kenneth Burke the human. Furthermore, students and scholars interested in archival research could certainly benefit from reading “Caught in the Act: A Writer in the Archives,” in which George provides an overview of archival research and justification of her theory and practice. In this chapter, George narrates her two-decade journey during which she produced her archival accounts, “not only to remind readers of their inevitable constructedness but also to mark my reflection on this construction as an integral part of scholarly knowledge creation” (128). George thoughtfully explains her research process and findings. Some of George’s most interesting findings can be found in “Archival Recalcitrance: The Ins and Outs of Communism,” which traces Burke’s arguments for communism as they unfolded throughout drafts of P&C. More specifically, George discusses why “Burke included arguments for communism in drafts leading up to the first-edition text and then removed them for the second edition published in 1954” (164) apart from the specter of McCarthyism. Although George readily admits it is impossible to read Burke’s mind, she proposes that Burke’s unsteady relationship with communism was more than “merely idiosyncratic” (187). George’s archival research led her feel that Burke “began to see it [Burke’s decision to eliminate arguments for communism in later drafts of P&C] as an extremely difficult practical decision in a fractured, unstable political scene” (187). Although it is difficult to know for sure why Burke from an initial belief that communism would reorient American culture to a decision to omit arguments for communism from P&C altogether, it is possible that decision “reflects his uncertainty about the practical means of establishing a civic art of living” (168). In “Archival Recalcitrance: The Ins and Outs of Communism,” George also elaborates on Burke’s tremendously influential collaboration with Mildred Ligda and Hermes Publications, a relationship George calls a “persistent blind spot in Burke studies” (166). While George does not believe Ligda is responsible for Burke’s decision to remove references to communism for P&C, she does argue that Ligda’s faith in Burke’s work “unmistakably shaped the book and its reception” (188). Ligda not only published all the editions of P&C, she also recirculated his books that had gone out of print (188). Feminist scholars interested in recovery might especially enjoy reading the information George includes on Ligda.

The final chapter of Part II, “Finding Time for Burke,” also pushes back against seemingly obvious understandings of Burke. George’s archival research offers a fascinating look inside Burke’s writing process, his relationship with his editors, and his crafty marketing skills. Readers are invited to understand Burke as a writer whose ideas evolved over time, not a savant whose ideas flowed effortlessly straight from a brilliant mind onto paper. George provides evidence of Burke’s detailed outlining, drafting, and revision. She explains that when students and scholars are confronted with Burke’s humanity, it becomes possible to understand P&C “as a material artifact that was written and produced” (127) as opposed to collection of abstract theories. George recognizes the common Burkean stereotypes that construct the lore surrounding his theories, explaining “in the 1930s Burke was dismissed, embattled, misunderstood” (191) but also asks readers to consider the idea that Burke’s story is more complicated, highlighting the intrinsic value of archival research. Although this in-depth study of Burke’s writing process is engaging, its optimal audience is more specific than earlier chapters of the book; it is for readers who want to understand the how P&C was first received. Lastly, George’s conclusion section makes the case that P&C is relevant today for scholars and for “everyday people in their everyday lives” (205). George’s critical companion is exactly the text everyday people, and even students or scholars, need to navigate Burke’s notoriously dense P&C.

Ultimately, Kenneth Burke's Permanence and Change: A Critical Companion is one of the most comprehensive sustained explorations of P&C available and is an excellent resource for new readers and experienced scholars alike who seek to understand Burke’s challenging text. George makes a persuasive case for “(re)claiming P&C as the inaugural New Rhetoric” in order to foreground the book’s “civic and pedagogical agenda” (207). Although the first parts of the book offer more than just a refresher course, George’s introduction and Part I would likely be most useful to students who are new to Burkean studies because it functions as an overview of key concepts. Though Part II is clear enough for new readers to follow, students trying to make their way through P&C will likely be best served by focusing on the first part of the book unless they are interested in learning more about Burke’s personal life. Seasoned Burkean scholars may find themselves jumping straight into George’s archival work, where they will certainly appreciate the glimpse into George's account of her access to “this brilliant, moody, hilarious, flawed individual who poured himself onto the page” (130). Kenneth Burke's Permanence and Change: A Critical Companion ambitiously claims to make P&C accessible for first time readers while still providing a nuanced resource for established scholars. Ultimately, George fulfills her purpose, and a variety of readers will enjoy reading her book alongside P&C.