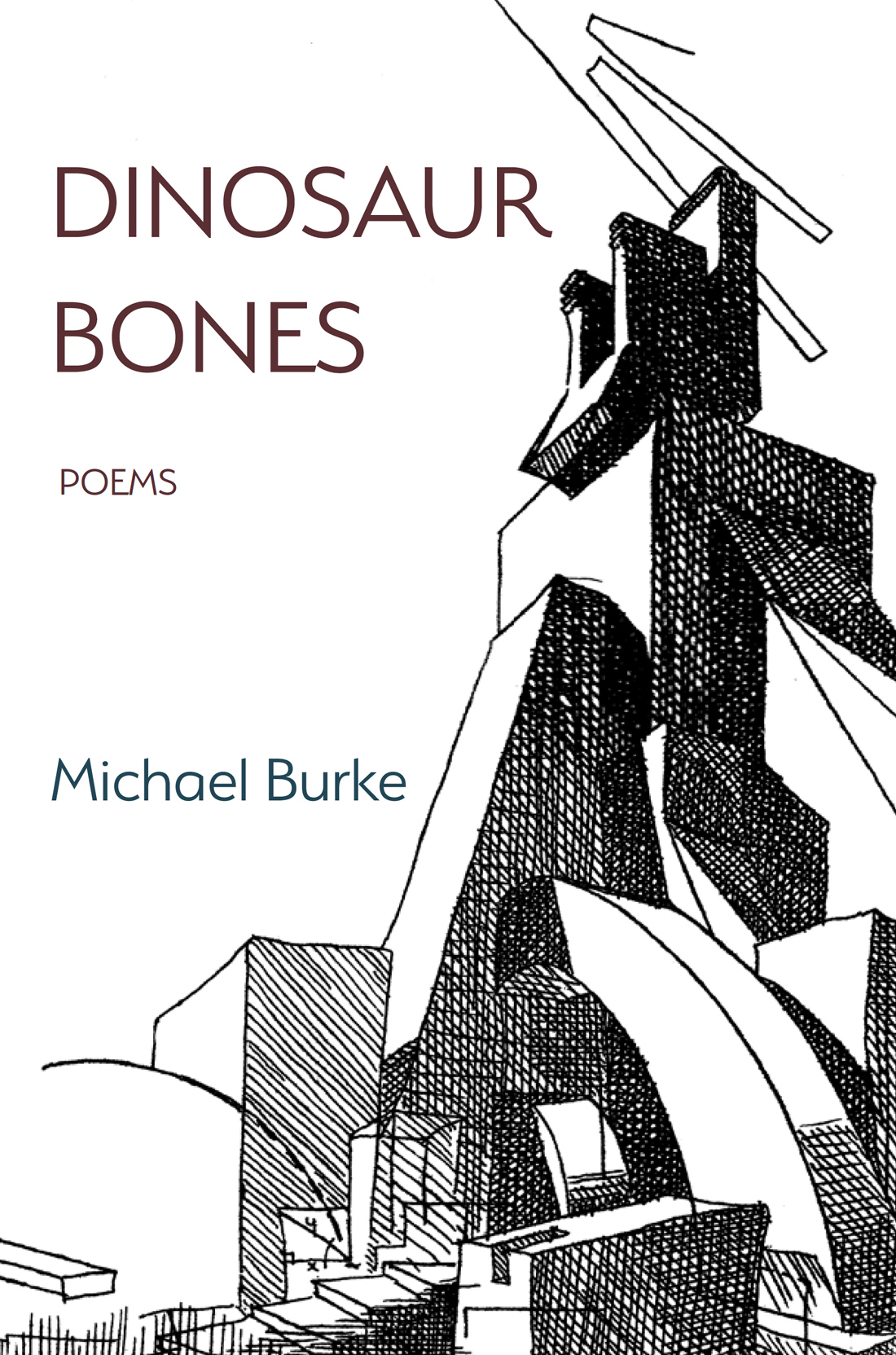 Sweep away your expectations, put aside your suppositions, dispense with your assumptions about what you think contemporary poetry, modern poetry, or even twentieth century poetry is, what poetry can and cannot do, what it is supposed to be in the twenty-first century.

Open your eyes to the possibility of a new collection of verse where the poet playfully sometimes dabbles with old- fashion’ contractions (“t’is”), in vogue from Shakespeare to the nineteenth century (except perhaps in the extraordinarily contradictorily iconoclastic work of Ezra Pound); sonnets in which appear inversions grammatical at the end of a line for meter’s and especially rhyme’s sake, as not only acceptable but devilishly relished; and even the occasional cliché that bounces around inside the poem like a happy basketball in the hands of adult kids in a playground court.

If you can do these things, you will not only thoroughly enjoy but perhaps absolutely rejoice in Dinosaur Bones (Parlor Press, 2022) by Michael Burke—son of the famous literary and rhetorical critic Kenneth Burke. Michael Burke is or has been an astronomer, city planner, architect, graphic artist, mystery writer—and now with the publication of this book—a poet.

This is Michael Burke’s first collection of poetry, and Parlor Press’s second in a series of what publisher David Blakesley calls “a poetry of ideas” (the first was Socrates at Verse and Other Philosophical Poems by Christopher Norris [2020]).  (M. Burke’s collection of verse also contains his original and very interesting post-industrial, posthuman black and white illustrations of what appear to be contemporary renderings of both dinosaurs and buildings—futuristic dinosaur buildings.)

As M. Burke states in his short, succinct Preface, these poems were written over the course “of many years”—and one might add, the course of many careers, because the diversity of the subjects in Dinosaur Bones reflect a continually roving curiosity and a living interest in and knowledge of multiple fields in detail. As M. Burke says, “From long to short, serious to light-hearted, literal to abstract. They were inspired by past loves, past losses, fantasies, hopes and strange fears” (p. ix). Published during a pandemic and another age of horrendous police violence against African Americans, this time captured on police video cameras and cell phones from multiple angles, the Preface not only acknowledges but situates this collection in the era of the almost mutual viruses of Covid-19, racism, and Trumpism; only the last, light poem, “Pandemic,” is explicitly on this subject.

Instead, this collection of verse does not pretend to directly address the globally atrocious year of 2020, but instead offers readers a joie-de-vivre that I think only Michael Burke could conjure, a life-affirming temporary escape rooted in his personal past: “I’ve tried writing poems that reflect the present, and have found it impossible. I’ve tried to shrink the distance between then and now, with the hope that it engages the thoughts of the present and hope for the future” (ix).

It succeeds in doing just that, and more. What is remarkable about this collection is that it seems to say and do everything it wants to, in any way it wants to, and revels in an unbridled freedom to do so—a freedom that, unburdened by scholarly concerns, the strictures of poetic etiquette and form (except for the humorous Shakespearian sonnets), and/or modern and poetmodern definitions and edicts of what poetry is—we can only fondly envy and wistfully admire, and enjoy.

However, the book is not haphazard, nor are the poems presented willy-nilly. The collection is tightly organized into four sections: the poems following the Preface, “The Martini Triptych,” “Sonnets,” and “Poems for the Summer Solstice.” Within these sections are poems on a wide array of topics and titles as diverse as caterpillars, the music of the spheres, beetles (a few childhood bugs and other creatures crawl and hop and fly around in these poems), dinosaur bones of course, old age, drinking alone, the silliness of sex, dark matter, planetariums; Albert Einstein (there are a number of poems—fully accessible—that are informed by science and astronomy and new physics, poetic subjects close to my own heart); driving, watches, alarm clocks, drawing, dentist chairs, chaos, rain, oaks, and “The Tar-Pit Machine.”

As in most good collections, in addition to being organized into groups, the poetry and verse in Dinosaur Bones are sequenced and layered and create meaning and surprise by their juxtaposition and order. This dimension of the collection is only enhanced by M. Burke’s original illustrations, which create various relations and effects with the poems, and are very well placed in the collection by author and press. (I will take this opportunity to point out here that author and Parlor Press did an excellent job reproducing and positioning these illustrations in relation to individual poems, and the book as a whole is beautifully designed.)
The poems themselves often begin with sheer description that then will suddenly veer off into a personal memory or story or analogy, with images that light up the poem like fireflies in a cozy but expansive backyard on a warm summer night. For example, here are two free verse stanzas that also reveal the meaning of style and structure, from the tittle poem, “Dinosaur Bones”:

This dinosaur once rested in soft tar
And remained, until
Its bones were spooned from the earth
By men who love their trade
Labeled, cleaned, polished
Reassembled in a ladder of ribs
Each a smaller copy of the one before (p. 21)

These are ‘storied poems’ (which figures given that M. Burke is a novelist), but like digging in and filling “the warm dark mud” (“Dark Matter” [p. 37]), the language often contains lines of great simplicity and beauty, such as the ones above, and sometimes an arresting metaphor, as in the way a butterfly will “become a piece of wind” (“Caterpillars Don’t Write Poems” [p. 3]).

Dinosaur Bones is a surprising and entertaining book, and one finds both delight and solace in its poems and drawings—not infections, but affections, generous reverences, subtle forms of love. And the reader cannot help but respond in kind, return the emotions. Poems start on the ground but soon take off into some sphere of the outer space of imagination, or insightfully delve down into the probabilities of the uncertainties of perception. This is not what I expected—and it works! What fun! And a love of life/life of love that is so comforting right now.