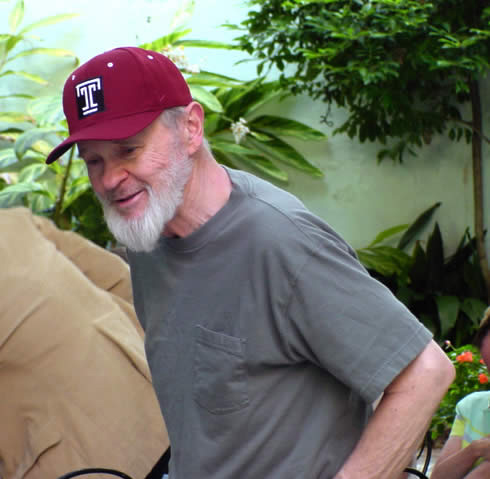 I’m sad to report the death of my old friend and a wonderful scholar Ed Appel, at the ripe old age of 86. I was in contact with Ed about a panel for the upcoming 11th Triennial Kenneth Burke Conference two days before he passed away on Tuesday, January 29, 2020 at his home. He never stopped working and was a frequent emailer and blogger with his friends and colleagues.

[The photograph of Ed was taken in 2002 at the KB Conference in New Orleans.]

Ed was best known as an encyclopedic scholar of Kenneth Burke’s rhetorical theory and a rhetorical critic who focused on conservative political discourse. He’s the best source for understanding Burke’s conceptions of the genres of comedy, tragedy, melodrama, and burlesque. He also added importantly to the question of when we are justified in expressing “warrantable outrage” (e.g., against Trump, as he was), despite Burke’s claim that seeing others as fools is the better route. (Herb Simons set the terms for that discussion, which Ed joined.)

Ed was awarded the Distinguished Service Award from the Kenneth Burke Society in 2017. He gave away his excellent primer on Burke, Language, Life, Literature, Rhetoric and Composition as Dramatic Action to all who wanted to learn more about his favorite scholar, though he was always adding addendums to the first edition, telling those of us her drew from the book to keep stuffing in extra pages. (These are all collected in the last edition.)

Ed was born in Philadelphia to the late James R. and Mabel Darlin Appel. He was married to Ruth Anne Yuninger Appel for 63 years. He is survived by her, three children, and a grandchild.

I have greeted Ed at every Triennial Conference since 1990. This one is going to feel strange. He will be missed.