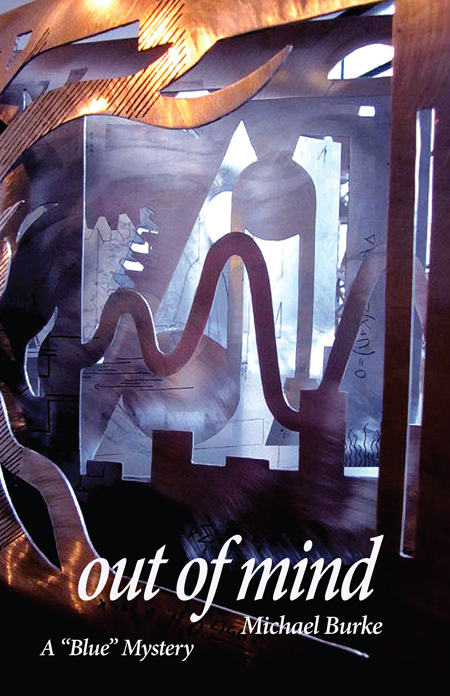 In Out of Mind, Michael Burke's richly-drawn private eye is back for another raucous ride on the roller-coaster that is the life of Johnny "Blue" Heron.  The third book in the series layers themes of Greek mythology, sexual fantasies that interrupt the narrative in unexpected places and the gritty characters who live at the Gold Hill Arms into a sandwich sprinkled with a slew of possible suspects and a cell phone that rings to the tune of Wagner's "Ride of the Valkaries."  In addition to the familiar ringtone, Out of Mind brings us Blue's love interest, Kathy, aka the Chief of Police, grey-haired, pony-tailed hippie Leroy, owner of Leroy's Bar and (added almost as an afterthought) Strip Club, and a perfect plot puzzle that incorporates scenes from the story of mythic Perseus.

We are first introduced to Blue Heron in Swan Dive, Burke's 2009 debut mystery novel that borrows themes from the myth of Leda and her swan god lover.  If you like your mystery with a side of Greek mythology, you will appreciate how Burke weaves small details from the myths into the narrative of his novels, but still leaves enough surprises and even the obligatory twist at the end of the novel to satisfy the reader with an unexpected culprit.  In his second novel Music of the Spheres (2011) we revisit Blue's balcony with the panoramic view of the night skies where we are treated to small, but regular references to Pythagoras's theory of the inaudible musical frequencies created by the rotation of the planets. In fact, one of the strippers, Stella Starlight, pole dances every night to "Music of the Spheres" (no cameras allowed). The tie between the title of Out of Mind and mythology is a bit more elusive and the twist is revealed on the very last page of the book.  However, Burke does allude to the legend of Perseus who severed the head of the Gorgon Medusa and we even have references to Hades's helmet of invisibility used by Perseus in his quest.

It's not surprising that the son of a gifted literary critic would be able to write a novel that embodies what Kenneth Burke had to say about the nature of form in Counter-Statement.  If "form" in literature is an arousing and fulfilment of desires that leads the reader sequence by sequence in anticipation and gratification, Michael Burke has mastered the ability to tell a rousing story that creates expectation in the reader and then meets that need. However, like any good mystery writer, the syllogistic progression is not perfect, as the unexpected intrigues us and keeps us turning the pages.  Michael Burke does not follow a completely predictable trajectory, which would give the mystery away, nor does he pin the whodunit on an illogical suspect.  He has mastered the trick of following a logical progression while still surprising us.

Part of that surprise is in the characterization of Blue Heron himself.  The back cover of Music of the Spheres refers to Johnny (Blue) Heron as a "down-on-his-luck detective," and at first glance, he doesn't appear to be what most little boys dream of becoming when they grow up.  However, Blue is, in fact, living a pretty good life. Yes, he does reside at the Gold Hill Arms on Machinist Drive.  Yes, to reach his place you have to pass by Iron Inc, the "rusted remains of a once-thriving iron industry" as well as Pharm-a-Lot, the drugstore that still hangs on because even those who are down on their luck need pharmaceuticals.  Blue's place of residence is inhabited by the strippers at LeRoy's bar and others who, for whatever reason, do not feel a need to have a McMansion in the suburbs, but most of them are exactly where they want to be.  Blue, a man of uncertain age, but definitely young and good-looking enough to have a lot of hot women hitting on him, seems to have plenty of things go his way. While many of the women who proposition him are only fantasy figures, he actually has real live women flirting with him wherever he goes and in every book, he gets to make love to a sexy character.  While his on-again, off-again girlfriend, Kathy, wants him to get a "real" job, he manages to live his vagabond lifestyle of picking up private eye gigs and freelancing for the local police department, and keep the girl, despite her threats to leave him.  And it's not like he can't get a real job; his friend at the police department frequently offers him full-time employment, which he turns down because he doesn't like the morning hours.

Michael Burke's eclectic life trajectory can be seen in the little details of Out of Mind.  His turn as an astronomer is evident in the book's first line, "It was a hot, damp August night, and the Perseids were spectacular."  In fact, his description of the night sky as seen from Blue's balcony is a spectacular painting, executed by a master artist.  Burke's turn as an urban planner is evident in his spot-on descriptions of Blue's generic town, somewhere on a train line to New York City, that has seen better days.  Burke is currently a painter and sculptor who has held exhibitions and installations in the U.S. and Europe and he puts this experience to good use as he paints pictures of the characters inhabiting Blue's world as well as the world itself – from the crumbling ruins where Blue lives and hangs out to the palatial realms of his clients.

One of the most satisfying mysteries about Out of Mind is the title itself.  What does this have to do with Perseus, Medusa, a headless corpse and a charity for kittens? As we gallop through the novel, we see plenty of references to the Medusa tale, but the relationship to "out of mind" is elusive.  It is only after the mystery is solved and all the loose ends are wrapped up, that Burke brings us back to the final mystery – that of the book's title.  Deftly using pieces of the Perseus legend and tying them in to the characters in the novel, Burke solves that final mystery on the very last page, wrapping up the syllogism neatly in a way that would have made Kenneth Burke proud.