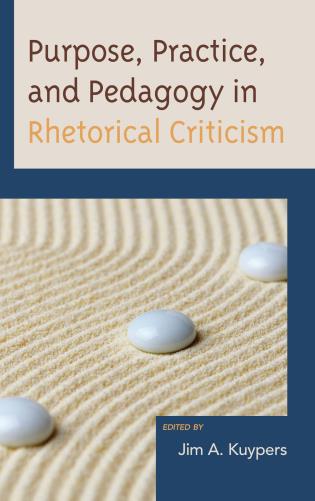 This book sets out to tell the back stories of fifteen prominent rhetorical critics and in the process to develop a rationale for rhetorical criticism (hereafter RC) as a legitimate academic enterprise. As critics, what do they hope to accomplish? How do they teach RC? And what does it mean to be such a critic?

These scholars explain their various approaches in a series of idiosyncratic essays that explore a wide spectrum of possibility. Consequently, the book opens an array of potential uses for beginning students and for those who may be stuck in a critical rut. I found the level of discussion to be high and the style of the writing to be engaging. It was a special, unexpected pleasure to also learn more about the people behind the critical work and the motives that drive them.

There is no apparent strategy to the arrangement of Kuypers's buffet of intellectual treats. The book does open appropriately by reprinting a statement from Edwin Black on what constitutes good criticism (Black n. pag). The goal of it, Black tells us, is fair judgment. The effect of it is enlightenment: good criticism surprises us, opens a portal on the textual point of focus. Or as Ryan Erik McGeough summarizes it, "The role of the critic is. . .to see more in the text than is readily apparent"(102). One caveat: the twin criteria of fair judgment and enlightenment don't seem of equal value. Rather, the enlightenment function of criticism appears primary: a fair criticism can be quite boring, but an unfair criticism can nevertheless be illuminating. The devil's discourse can be instructive despite itself.

Black's reflections also raise an interesting companion question: what motivates the proper reading of RC? Perhaps we could say that the competent reader seeks not confirmation of some previously decided point of view, but rather desires to penetrate the mystery of rhetorical power and influence. Or perhaps such a reader seeks to develop resistance to a rhetoric that would otherwise exploit. Or perhaps again, a proper reading of RC may seek to satisfy curiosity over the symbolic ways that humans have with one another. Certainly it is true that good criticism requires a competent reader to complete its purpose.

It was a happy idea to begin this feast of ideas with Black. He satisfies one of his own requirements: if he does not surprise us, he certainly strikes intellectual sparks. One other possible shortcoming is that while Black discusses good criticism as a genus, he does not focus precisely on the species (or subspecies) of RC. Indeed, it would be desirable if the entire terrain of criticism were laid out more clearly for the reader's inspection. Are there distinct domains, for example, that separate esthetic, philosophical, and historical criticism from each other and from RC? Do these border on each other or do they interpenetrate, comprising one grand critical perspective that shifts according to the reader's need and to the nature of the text? These are questions to contemplate as we launch further into the book.

While the fifteen essays that follow are all over the intellectual map, they converge on one central issue: What justifies RC? This question would appear grounded in how the critics approach the nature of rhetoric itself. The writers appear to accept the premise that we are social and symbolizing creatures and that how we interact through symbols can be crucial to our survival and well-being as well as to our power positions within social hierarchies. The study of rhetoric becomes the study of how we influence one another through symbolic interactions. As Marilyn Young puts it, "The purpose of rhetorical criticism is to explore, illuminate, and explicate human communication in its many forms" (194). Criticism becomes an assessment of the quality and ethics of symbolic influence and what it reveals about us (Kathleen Turner calls us "verbivores," borrowing Stephen Pinker's happy neologism [Pinker 24]). Andrew King points out that such criticism can be justified, as De Quincey once noted, by the "sheer intellectual pleasure" it can provide (70): in short, there can be an element in RC which is its own excuse for being

In response to the question of justification, however, most of the contributors emphasize the instrumental nature of RC--it does some good in the world. Some of the essayists, for example, emphasize RC's possible contribution to our knowledge about rhetoric. Edwin Black's insistence that good criticism should surprise us and teach us something sets the tone for this emphasis. Jason Black calls this "appreciative"criticism, and describes it as preliminary to "interventionist" criticism that would alter the behavior under consideration (8-11). Celeste Condit agrees that the function of RC is to help us understand more about ourselves, but she turns the focus to the power of emotion in public life. The role of RC should be to help us guide the role of feeling in productive directions. Especially when we need to influence the choices and policies that govern our lives. RC can help us ask the right questions when we must evaluate discourse that asks for our commitment. It can also help us develop effective strategies in dealing with the controversies that confront us.

Ned O'Gorman warns, however, that preoccupation with technique can deflect the critic's attention from the underlying moral aspects of discourse. But I would argue--I believe in agreement with Herbert Wichelns--that one can enter the moral dimension of a work through a grasp of its technique and technical boundaries. Once we grasp, for example, the binary nature of many archetypal figurative clusters (light-dark, war-peace, high-low, forward-back, etc.) we can see how the mind superimposes itself upon perceptions and reduces, simplifies, and shapes them in ways that can have profound moral implications. In a perversion of ethos, for example, speakers can pose as the sun that will bring us enlightenment, the captain who would impose unrelenting discipline on the ship of state, or the general who would command us into battle. Thus a grasp of rhetorical technique, rather than distracting us from moral considerations, can be our point of entry into what can be the dark moral universe of a text.

The discovery function of RC also relates it to the generation of rhetorical theory. While others support the importance of other functions, Samantha Senda-Cook emphasizes that the purpose of RC is to "build theory" (150). In his elegant essay, Raymie McKerrow develops this idea in a pluralistic approach: the motives for RC can be many, depending on the critical question that drives one's work in the first place. What RC helps us discover about human symbolic behavior also helps us understand and appreciate ourselves and our possible species shortcomings for which we must somehow attempt to compensate. RC helps us expand and correct the systematic explanations we develop to account for phenomena in the world, including the phenomenon of symbolic behavior. In turn these enhanced explanations can help sensitize the critic to subtle resonations within texts.

At the other end of the continuum, other critics pursue more concrete, socially useful, immediately practical justifications for RC. Michael Hogan would reclaim "a neoclassical rhetoric for the digital age" (63), which would ground our discipline in civic education. This focus, would help students become more effective citizens by teaching them how to argue and how to evaluate the arguments of others. The approach revives what Hogan calls the Wisconsin Idea, a movement out of the Progressive Era which depicted the critic as a "consumer 'watchdog' in the marketplace of ideas" (55). The goal is to develop "citizen critics" in line with David Zarefsky's vision of growing "a deliberating and decision-making public" (Zarefsky 133). Robert Terrill expands this theme of connecting RC with learning the art of citizenship. Acquiring rhetorical sensibilities encourages, he says, the "crafting of rhetorically-habituated selves" (165), instrumental to participation in public life. And in his insightful essay, Martin Medhurst goes beyond the idea of civic education to reinforce the classical idea that the study of rhetoric can become the nexus for many of the liberal arts and should be central to a liberal education.

Operating also at this "practical" end of the justification continuum is an essay that is destined to be perhaps the most controversial in the collection. Dana Cloud champions what she calls "ideology criticism," which takes up the cause of the underdogs in our society against those who exercise power over them through exploitative rhetoric. Such criticism exposes the tactics of the one-percenters and their lackeys, racists, anti-feminists, and other such undesirables.

Hers is a provocative essay and there is much about its program for RC that seems attractive. It is quite timely in an era in which power and wealth are indeed more and more concentrated and the voices of many who claim to represent poor and working people seem muted and discredited. The power of large corporations has surely been magnified by recent court decisions that loosen, for example, restrictions on contributions to political campaigns. Clearly, the potential for mass manipulation through the media has grown exponentially. Developing a counter-consciousness along lines suggested by Cloud could well help students build a much-needed resistance to dangerous abuses of power. Finally, the course Cloud describes appears to inculcate a set of sophisticated questions that should help students probe the mysteries of elusive rhetorical texts.

These virtues, however, do not come without a price tag. For one thing, the kind of criticism favored by Cloud is quite melodramatic. It envisions a world without moral nuance or complexity, a world which poses wicked exploiters against innocent victims. Presumably, in the bold new world that will follow the successful revolt of the oppressed, these newly emancipated innocents will themselves resist the urge to abuse their own newly found power. The former abusers will remain either wicked and diminished or will somehow find redemption: their fate is not entirely clear and perhaps they do not deserve our concern. It seems so easy in this melodrama for the discussion to pass over into stereotype and caricature. For example, the abusers are described as "elites who subordinate their wives, starve the poor, visit prostitutes, and so on" (31). This kind of language raises concerns about the fairness of ideology criticism as a serious mode of inquiry.

Another problem is that the worldview of ideology criticism pre-programs the criticism and constrains the critic. The critic's function now becomes solely to reveal the abuses perpetrated by the few and the powerful. As Condit argues, "To do rhetorical criticism . . . requires that one approach one's task with a question, rather than with a hammer designed to pound home what one already considers the truth" (45). Hammer-oriented criticism, Edwin Black would complain, is quite predictable: its range of discovery is limited, and it risks simply becoming an instrument to promote the predetermined narrative of good vs. evil in the class struggle. Ironically, the price of its function to free the innocent is that it must also confine the critic.

Having expressed these reservations, this is an essay I would rely upon to provoke thought and argument in the RC classroom. Moreover, this essay, along with those especially by Turner, Jason Black, Kuypers, Condit, and Medhurst, offers rich pedagogical suggestions. Using this book as a springboard, I would pursue Medhurst's vision of a course that would be "central to a liberal education," that would pursue Turner's desire to "teach my students how to think," and that would promote the Hogan/Terrell ideal of effective citizenship

What a contribution Jim Kuypers's book makes to our discipline!

* Michael Osborn is Professor Emeritus in the Department of Communication, University of Memphis.