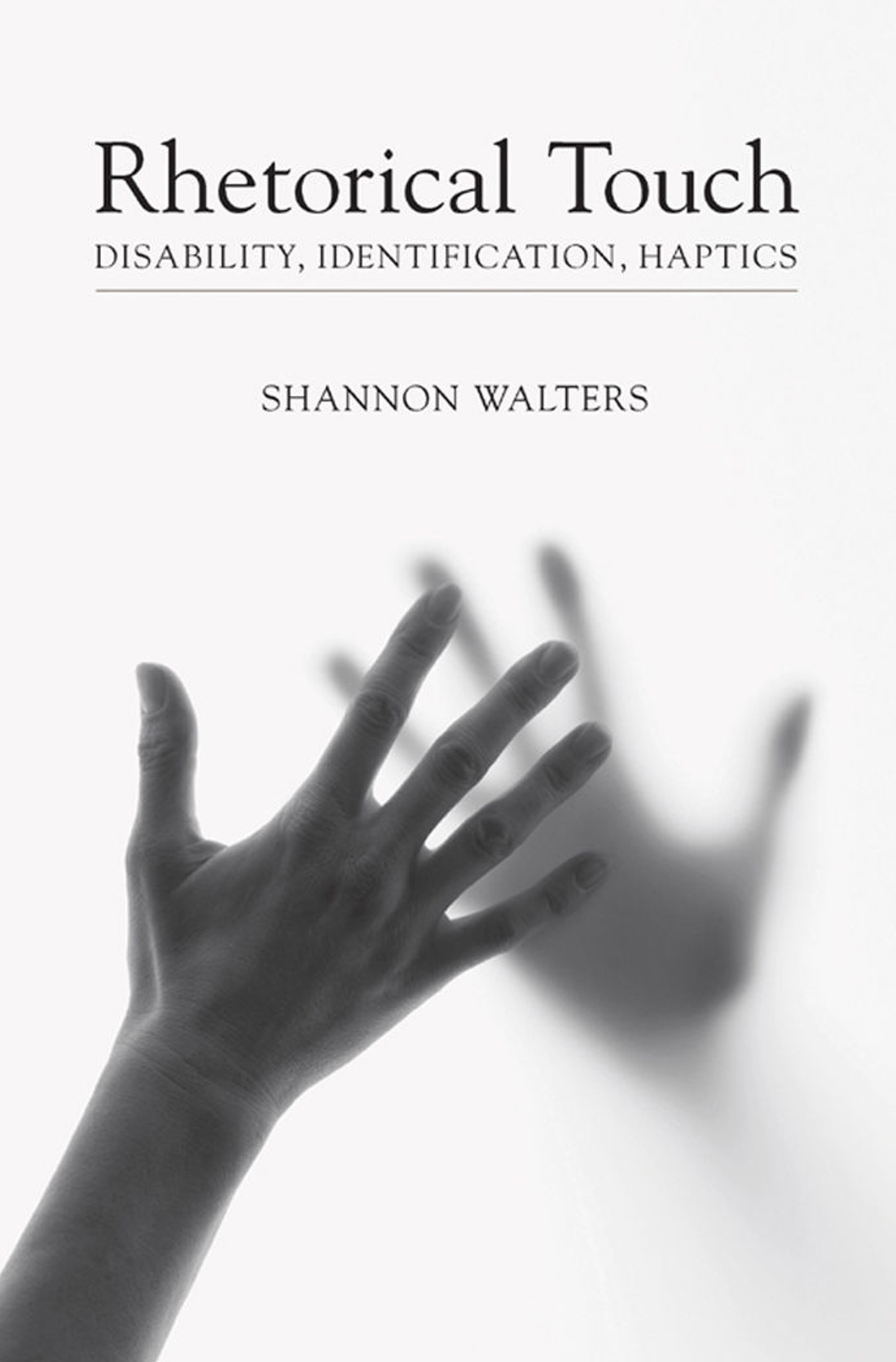 In this highly insightful and important book, Shannon Walters makes a compelling case for exploring the rhetoric of touch. Adding to the work of scholars who examine rhetorics of disability (e.g., Brenda Brueggemann, Margaret Price, and Jay Dolmage) and scholars examining corporeal rhetorics (e.g. Debra Hawhee, Nathan Stormer, and Robin Jensen), Walters shows that a rhetoric of touch facilitates a better understanding of how some disabled people practice identification. Walters provides several case studies—including those of Helen Keller, Temple Grandin, Harriet McBryde Johnson, and the technology of machine interfaces—to reveal numerous ways that a rhetoric of touch already operates throughout rhetorical praxis, and how its absence in rhetorical theory generates unfortunate assumptions about disabled rhetoricians. Her review of the relevant literature in disability studies connects her work to an impressive list of scholars whose research supports her claims. This results in a fairly comprehensive and ultimately persuasive argument for rhetorically investigating haptics.

Walters’ work reveals the potential of studying a rhetoric of touch that extends beyond the areas of disability and body studies. Like Dolmage and Price, Walters’ analysis of touch calls for renewed attention to the ideas of mētis, kairos, ethos, pathos, and logos, particularly as they can be reconceived within the context of haptics. Integrating haptics with these concepts, Walters rescues touch from approaches to rhetoric that traditionally ignore it. The result challenges contemporary rhetorical critics and scholars to consider touch in their own work, and to “let go of the idealized image of an independent, nondisabled, singular rhetor and to embrace the possibilities of new configurations among communicators, speaking and nonspeaking, and multiple audiences across ranges of ability and disability” (199).

Readers of this journal will be impressed by Walters’ thorough analysis of Kenneth Burke, whose theory of identification and its explicit connection to touch plays a prominent role in her argument. For the extensive group of scholars inspired by Burke, her exploration of this often-overlooked aspect of his work encourages many to reread him from a new perspective, and provides those encountering Burke for the first time the opportunity to discover an important dimension of his writing.

For reasons like these I conclude without reservation that rhetorical scholars of all backgrounds should read this book. The exciting and enlivening injection of disability into conversations about rhetoric open doors to new ideas and refreshing reviews of classic concepts. As with any discipline, such moments promote the growth necessary for rhetoric to remain viable and vital.

The book’s strengths outweigh what I see as a potential flaw. Walters generally does not investigate and bring attention to the problem of ableism; the word appears only twice in the first 150 pages of the book. This allows her justification for the study of haptics to rest on the cultural pervasiveness of ableist ideas. I do not suggest that Walters herself encourages an ableist orientation, but her approach locates haptics as a solution for disabled rhetoricians and tends to erase ableism from classical rhetorical theory.

For example, her discussion of how Autism should encourage analyzing touch rests on what she aptly identifies as the misperception and false stereotype that Autistic persons cannot practice identification because they lack the “ability to share common interests with others” (112). Walters suggests that an investigation of haptics would illuminate a common ground between Autistic people and neurotypicals, through which the former could craft ethos. In other words, she claims that recognizing the ways Autistic persons employ “a rhetorical strategy of ethos construction based on touch” (117), would resolve the problem that when “people with autism are assumed to be emotionless, apathetic, and unconnected to the world around them, audiences are less likely to be receptive to their efforts at ethos formation” (113). Articulated this way, this invalid assumption becomes a problem for the Autistic, instead of a flaw in rhetorical theory or a problem for ableist audiences. Walters writes: “In rhetorical terms, disabled rhetors are often limited by a predetermined set of emotions or appeals of pathos based on audience expectations about the negative experience of disability” (144, emphasis added). In this stance, it is the disabled people who are limited, rather than the ableist audiences or perspectives of contemporary rhetorical theorists.

Positioning the lack of ethos and pathos associated with these disabilities in this way tends to distance the issue from the ableist perspectives that motivate it. Like the classic ableist view which situates the “problem of disability” in the disabled—in contrast to the activist view that situates the problem of ableism in society—these warrants ground the need for change in the rhetorical disadvantages of being disabled. I contend that the absence of haptics should not be seen as a disabled peoples’ problem; it should be seen as a rhetorical theorists’ problem. Autistic people and activists do not need a theory of haptics so that audiences and rhetorical theorists learn a different way to construct ethos and pathos; audiences and rhetorical theorists need a theory of haptics to help them see and confront their assumptions about disability.

The subtle difference between these two appears salient in the way that the first view deflects attention from the widespread presence of ableist thinking in traditional rhetorical theory, while the second view emphasizes it. Throughout the work, Walters constructs detailed arguments that suggest an implicit recognition of the importance of touch in the theories of classical rhetoricians, instead of arguing that the rhetorical theory at least since Aristotle has treated haptics as inconsequential. I find this move unnecessary and occasionally counterproductive. Walters contends the treatment of sensibility—including touch—in De Anima locates it as an important human capacity, so she concludes that Aristotle’s definition of rhetoric as finding the available means of persuasion must necessarily consider touch as one of those means. Similarly, she points out that Aristotle suggests that “meaning can be grasped,” and, since grasping is a “tactile act,” Walters concludes that Aristotelian rhetorical theory incorporated persuasive means that involved touch (34). Through such somewhat tenuous arguments Walters finds ways to insert touch into the classic Aristotelian definition of rhetoric, which she admits seems “at first blush” to be “particularly unaccommodating to disabled rhetors” (31).

This approach may appeal to scholars who desire to maintain Aristotle’s hallowed position in the rhetorical pantheon, but I suggest that a more convincing, and ultimately more useful position, would be to articulate Aristotelian theory as unabashedly ableist. As scholars like Rosemarie Garland-Thompson and I have argued, Aristotle’s On the Generation of Animals, one of the first texts to develop the study of monsters (teratology) employs an explicitly ableist logic. The presence of ableism in Aristotelian writings suggests a simpler explanation for the lack of developed attention to touch in the Art of Rhetoric: Aristotelian rhetorical theory—and, by extension, a good deal of rhetorical theory built upon it—accepts ableist assumptions as valid warrants. Given the pervasiveness of ableism throughout the history of Western culture, this should not surprise us. And it should encourage rhetorical scholars to investigate touch throughout rhetorical praxis as a way to help combat ableism wherever it can be found, including in their work.

I regard this concern as a space for further development of research into haptics, rhetoric, and ableism, and I strongly encourage you to read this exceptional book. Walters does an impressive job demonstrating the value of a rhetoric of touch to all rhetoricians, and she cannot possibly be expected to take on all the problems promoted by ableist culture. Walters’ contribution should play a vital and significant role in the overall project of rhetorical and disability studies to expose ableism and work to emancipate disabled people from it. Her book may appeal most directly to those whose work intersects with disability and bodies, but it should engage and illuminate any critic or theorist who seeks useful ways of understanding rhetoric and what it can accomplish.