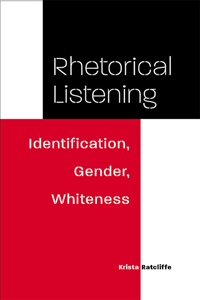 During the 2005 Kenneth Burke Conference at Penn State, I was lucky enough to meet Donald Jennerman, who told me stories about knowing Kenneth Burke. One in particular has always stayed with me. It has to do with Burke’s notion of the negative. The story goes that, as a child, Burke’s grandmother would follow him around the house and any time Burke would touch or grab something he wasn’t supposed to, his grandmother would shake her index finger and say, “You musn’t.” This experience of listening to his grandmother, as I understand it, was the genesis of his later theories of the negative.

Listening is a skill often overlooked in scholarship, and yet in the anecdote above, it is the means by which we learn, retain and share stories, hold onto memories, understand our world, and develop our own voice in conversation with others. Krista Ratcliffe’s work, Rhetorical Listening: Identification, Gender, Whiteness, has given “listening” new prominence in the field of composition and rhetoric for the way she extends Kenneth Burke’s theories of rhetoric. It is a work that explores how rhetorical listening, grounded in Burke’s theory of “identification,” might foster and increase cross-cultural communication in a number of different contexts.

In her introduction she writes, “This concept of rhetorical listening is important to rhetoric and composition studies because it supplements Kenneth Burke’s rhetorical theory” (1). She frames her project through Burke’s theory of identification in A Rhetoric of Motives and extends listening’s social and communicative function when talking about gender and whiteness:

In other words, Ratcliffe demarcates her project in questioning how rhetorical listening operates as a stance/space that allows individuals to foster “conscious identifications” in overcoming troubled issues of gender and race within cross-cultural communication practices.

In the first chapter, Ratcliffe sets the foundation for what she refers to as rhetorical listening. She writes, “As a trope for interpretive invention, rhetorical listening signifies a stance of openness that a person may choose to assume in relation to any person, text, or culture” (her emphasis 17). In defining this, Ratcliffe goes on to review how listening has largely been overlooked in composition scholarship. She “makes a case” for what listening has to offer research. Later, she elaborates on what she means by rhetorical listening as a trope for interpretive invention, where a person occupies a space of openness “to cultivate conscious identifications in ways that promote productive communication” (25). She defines a “code of cross-cultural conduct” that “assumes that listeners posses the agency for acknowledging, cultivating, and negotiating conventions of different discourse communities,” (34) and she details how “rhetorical listening may foster understanding of intersecting gender and race identifications in ways that may promote cross-cultural communication” (35).

Ratcliffe’s critique of Burke’s theory of identification, with its limited discussion over the inequities found within cross-cultural communication contexts, is a fair perspective when looking back over A Rhetoric of Motives (RM). But I also believe Ratcliffe overlooks a critical passage in RM, a passage where Burke readily opens the door for the type of project Ratcliffe pursues in Rhetorical Listening. Towards the end of “The Range of Rhetoric,” Burke outlines how the resources of identification can extend into a more idealistic realm found within human relations:

[T]he resources of identification whereby a sense of consubstantiality is symbolically established between beings of unequal status may extend far into the realm of the idealistic. And as we shall see later, when on the subject of order, out of this idealistic element there may arise a kind of magic or mystery that sets its mark upon all human relations. (46)

Burke shows that through the resources of identification, a more “idealistic realm” is found within human relations. And it is within this idealistic realm that Ratcliffe is able to carve out her extended theories of identification in Rhetorical Listening, making it accessible and giving it form in practical ways that promote what she refers to as “productive communication” (25).

After making this critique, Ratcliffe moves beyond Burke to outline competing definitions and functions of identification and how it “directly informs or indirectly haunts academic theories in many fields, such as, psychoanalysis, philosophy, communications, drama and performance studies, queer studies, [as well as] feminist studies” (50).

In the last three chapters of the book, Ratcliffe outlines different contexts in which rhetorical listening can be applied as a tactic. Chapter 3 is entitled, “Listening Metonymically: A Tactic for Listening to Public Debates.” In this chapter she offers specific functions that rhetorical listening can take in listening to public debates. In Chapter 4, Ratcliffe introduces another tactic for listening that she refers to as “eavesdropping” in scholarly discourse. She writes that “eavesdropping is . . . an ethical tactic for resisting the invisibility of a gendered whiteness in scholarly discourses within rhetoric and composition studies” (her emphasis 101). She recovers the term from its negative connotations (as “busybody”) and redefines it “as an ethical rhetorical tactic . . . as a means for investigating history, whiteness, and rhetoric” (103). In the final chapter, Ratcliffe outlines how to “listen pedagogically” and how rhetorical listening in the classroom can overcome resistance between students and teachers. After a thorough discussion on pedagogy and resistance, Ratcliffe elaborates on issues of gender and whiteness in the classroom, outlining specific ways of helping students develop awareness of these issues. In the appendix section of the work, Ratcliff generously shares her assignment sequence and lesson plans for those interested in incorporating these strategies for teaching gender and whiteness in an advanced writing course.

Krista Ratcliffe’s Rhetorical Listening: Identification, Gender, Whiteness is a work of tremendous impact for composition, communication, and rhetorical studies, not only for the ways it calls attention to the importance of listening as an area of scholarship, but for the ways it extends Kenneth Burke’s theory of identification in order to help bridge the difficult space between cross-cultural communication. In fostering “conscious identifications,” brought about through acts of rhetorical listening that are cognizant of the interplay between disidentifications and non-identifications, Ratcliffe brings to the forefront research that holds great theoretical and pedagogical potential. Burke’s Grammar of Motives opens with the epigraph, “Ad bellum purificandum” (the purification of war), an epigraph that calls for greater rhetorical awareness that might advance peaceful communication practices. Towards this end, Ratcliffe’s work is a step in that direction, one that reminds us all of the importance of listening rhetorically, whether dealing with our students, scholarship, public debates, colleagues, or a grandmother who shakes her finger to admonish, “You musn’t.”

Steven M. Pedersen is a PhD Student in Rhetoric and Composition at Oklahoma State University.