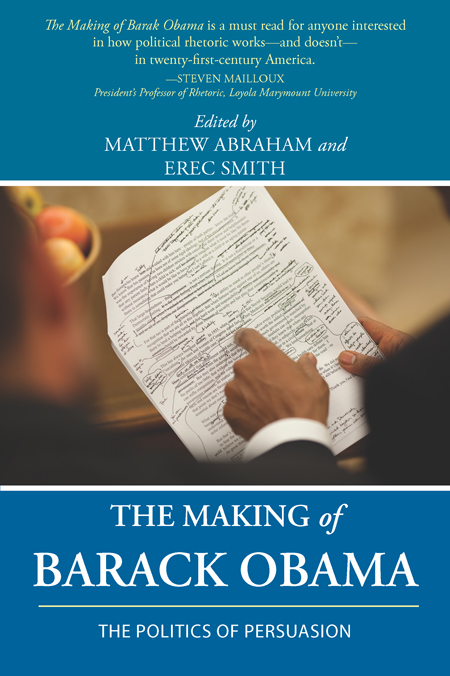 Some U.S. presidencies are more historical than others, and some may be more rhetorical than others. Certainly, the election and presidency of Barack Obama has captured the attention of rhetorical critics, both because of the historic nature of the first election of a man who identifies as African-American and because of the rhetorical and oratorical skill he exemplifies. The Making of Barack Obama: The Politics of Persuasion is a collection of essays dedicated to exploring the rhetorical moves made by Obama as he "made" himself in his first campaign for the presidency and in his first administration, particularly his first two years in office. The book includes an introductory overview of the importance of studying Obama from a rhetorical perspective, nine essays delving into Obama's rhetoric—either in particular speeches or in addressing particular issues, and a final reflective essay by David Frank that draws out lessons to be gleaned from the substantive essays.

As a whole, the essays represent a nuanced account of Obama's rhetorical strategies, strengths, and shortcomings. Representing criticism that ranges from situational to Ciceronian to constitutive analyses, the essays address not only the challenges Obama faced, but also the implications of his successes and failures. In the Editors' Introduction, Matthew Abraham and Erec Smith note that, "Obama seems to have mastered Burkean concepts such as identification and consubstantiality, as well as Perelman and Olbrecht-Tyteca's conception of adherence." Indeed, issues of identification and division, of presence and adherence, are brought to the fore in this collection, offering much food for thought for Burkean scholars interested in the rhetoric of Obama, and specifically, how his rhetorical moves strategically negotiated the dialectic tensions of identification and division. In this review, I will highlight three themes that emerge in the book that serve to encompass Obama's construction of himself and his audience within the context of his campaign and early presidency:  how he faced unique situational constraints, how he addressed complex composite audiences, and how he attempted to construct himself as consubstantial with his audience.

While all of the essays consider situational constraints facing Obama, two of the essays make Obama's response to particular situational constraints a more explicit focus. In the first essay of the book, Robert Rowland answers critical evaluations of Obama's domestic policy rhetoric by demonstrating that Obama's explicit and detailed explanations and justifications of his budget proposals, clearly argued and rhetorically sound cases for reform, failed not from a lack of rhetorical effort, but due to a long list of systemic and political constraints that made it all but impossible for Obama to win Congressional support for his domestic policy agenda. In his essay on Obama's response to Bush's statements on torture policy, Richard Marback argues that Obama's restrained and deliberative rhetoric appears weak and unpersuasive when contrasted with his predecessor's expansive presidential rhetoric that emphasized his role as the sovereign "decider." Marback makes the case that Bush's rhetoric functions as a constraint on Obama, who had the daunting task to "raise the level of rhetoric from rationalizing the sovereignty of the decider to encouraging the character of everyone" (159). These two essays importantly remind us of Burke's admonition that rhetoric, indeed, is contextual, and real material constraints exist. These essays highlight how Obama's choices in the face of these constraints define him as a pragmatic policy advocate.

A consistent constraint of presidential rhetoric is the need to address composite audiences. John Jasso and Anthony Wachs offer an intriguing account of Obama's relationship with Catholics by tracing his appointments to key social welfare and health care posts as symbolic acts that negotiate his relationship with dissident Catholics, the Catholic laity, and the Church hierarchy. Jasso and Wachs show how the shifting appointments and rhetoric surrounding them signal shifts in Obama's strategies for appealing to Catholics and non-Catholics, and open opportunities for different interpretations of that relationship. Michael Kleine explicitly addresses the composite audience in his analysis of Obama's West Point Address. Drawing on classical rhetorical theory, Kleine demonstrates that in this discussion of the war in Afghanistan, Obama establishes both his own authoritative presidential ethos and the ethos of the nation as a moral member of the world community by unifying policy factions through his use of narrative, argument, and refutation in support of a moderate policy claim. Both of these essays remind us of the importance of rhetoric as addressed, and thereby as a means of negotiating meanings among multiple audiences with different interests.
Perhaps particularly intriguing from a Burkean perspective are the essays that address how Obama identifies himself with, even embodies, the American collectivity, and how these attempts at identification ultimately demonstrate the simultaneous pull toward division. Courtney Jue's account of Obama's campaign rhetoric demonstrates how he met the demands of constitutive rhetoric by appealing to common values and constructing the audience as an historical subject, which led Americans to embrace his identity as their own. At the same time, the backlash by those who did not see themselves as part of Obama's "we" shows the persistence of division among composite audiences. In his analysis of the much analyzed "A More Perfect Union" speech, Erec Smith focuses on Obama's response to the Jeremiah Wright controversy as a kairotic moment through which he was not only able to establish himself as "a model American," but also to call for a more participatory democracy (102). Smith contributes a strong argument for the value of the speech in creating a "neutrality of culpability" that is prerequisite for effective citizen dialogue on race (108). These essays offer new insights into the identificatory and constitutive dimensions of Obama's discourse.

Several essays highlight the shortcomings of Obama's identification strategies. Steven Salaita offers a comprehensive account of the discourse of racial belonging in America, demonstrating how Obama's response to racialist discourses targeted at him actually allowed him to place himself within a normative construct of Americanism positioned against the "foreign" identities of Arab and Muslim, thereby reinforcing the very division he purported to overcome. In his critique of Obama's Cairo speech, Matthew Abraham notes the constraints Obama faced in appearing empathetic to the Arab world while maintaining absolute loyalty as an American. Abraham shows how Obama met those constraints through a rhetorical strategy that reinforced a "good Muslims" and "bad Muslims" distinction within his call for "a new beginning in East-West relations" (182). René Agustin De los Santos' analysis of Obama's speech at the 2009 Summit of the Americas draws on Zarefsky's account of presidential rhetoric as defining political reality to provide an insightful exploration of the barbarism/civilization dialectic that has characterized the history of U.S.-Latin American relations. De los Santos shows that Obama's rhetoric ultimately falls short by failing to break out of that historic dualism. These essays artfully critique Obama's strategies of identification by attending closely to his linguistic motives as he addresses particular audiences.

The Making of Barack Obama: The Politics of Persuasion has much to offer rhetorical scholars in general, and Burkean scholars in particular. Individually and as a whole, the essays attend carefully to context and audience dynamics to provide insightful readings of many important speeches and issues addressed in Obama's first campaign and first term. The essays are strongly theoretically grounded, offering the reader new insights into constitutive rhetoric, the rhetorical presidency, and cultural politics. In the final essay of the volume, David Frank gleans insight from each essay as he notes the uneven character of Obama's presidential rhetoric. The influence of Burke can be seen in Frank's statement that he leaves the book "inspired to think through how presidents deal with the challenge of reconciling opposites and the rhetorical problem of the composite audience" (212).

The strength of the volume is, indeed, in its pointing up of the oppositions, tensions, and ambiguities that for Burke are the "characteristic invitation to rhetoric." Clearly, the push and pull of identification and division characterize the rhetoric of Obama, but this volume also points us to issues of rhetorically negotiating stability and change, a necessary task for a president, if not a candidate. Ultimately, the essays in the book point us also to the rhetorical tension of authenticity and strategy. Where some see in Obama's discourse an authentic rhetoric of unity, others see a strategic exploitation of divisions. The rhetoric of the Obama presidency will certainly be analyzed for years to come, and this volume suggests that such critique will likely result in new questions, deeper understandings of presidential rhetoric, and conflicting insights and conclusions. Burke wouldn't have it any other way.